The Unterzee is a massive underground ocean to the east of Fallen London. Its salt waters, teeming with life including monsters aplenty, are the impossible color peligin.

Thanks to the Treachery of Maps, one of the many ways the Neath violates the laws of nature, geography is a bit more... fluid than usual. The Unterzee's many islands tend to move around, though a few things remain constant. On its western shore lies London and the settlements around it; to the south lies the Elder Continent; to the east lies the zee-god Salt's domain; and you do not want to go north.

Alongside the settlements above the zee's surface, there are some below as well, and it's not just drownies that make their homes down there...

The Sea of Voices. Art from FL 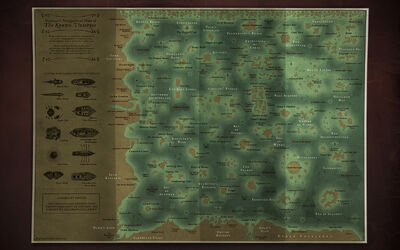 A map of the Unterzee
Trending pages